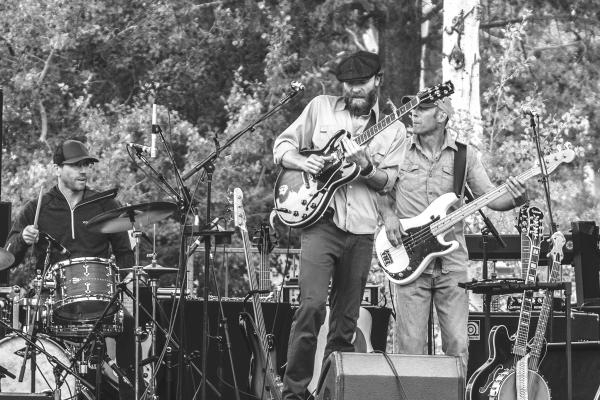 The distance between a sure bet and a Mystery is adventure fueled by trepidation. Multi-instrumentalist and vocalist Aaron Davis works the lesser-worn corners of the American musical fabric through an unconventional lens. Slide banjo? Detuned guitar made of metal? An electric cigar box? You bet. From "searing slide guitar" (Country Weekly) in the blues vein à la Duane Allman with “a particularly interesting approach that mixes poetry, groove and roughness” (Lonestar Time) to a patchwork of fingerstyle folk, gritty alt-country, gypsy grass, and soulful roots-rock, Davis has been described as a “truly phenomenal songwriter” (About.com). The fluidity is at the hands of fervent texture experts of a touring brotherhood, The Mystery Machine—drummer Jason Baggett with 3-part harmony via bassist David Bundy and piano/organ/synth man Mike Patton.

Davis’s ninth album and second release under his name, The Meander (June 2019), features The Mystery Machine along with a dozen musical guests from the greater Wyoming musician community. Wyoming-based and Kentucky-bred, Davis is chiefly known as co-founder of decade-long Americana band Screen Door Porch, which toured nationally and became a household name in the region. According to Vanguard Records executive and critic Bill Bentley, “Screen Door Porch transformed roots music into something much larger, a down home good time vibe that induces sonic hypnosis.”