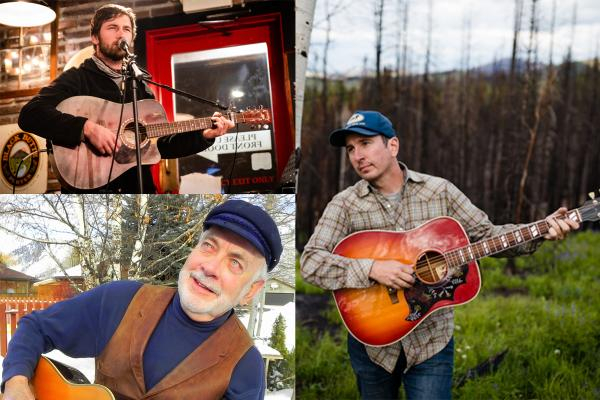 John Sidle’s love of Folk Music began around campfires at college outing club trips. As the sun went down and dinners were over, cups of coffee were filled and guitars came out. The old songs of romance and derring-do were sung as the stars danced overhead. Later on, John spent many nights frequenting the Folk Music clubs in the Boston area where he heard many of the great artists of the ‘60s, including Bob Dylan, The Kingston Trio, Joan Baez, Joni Mitchell and many more. Here, he honed his musicianship and added to his repertoire.

Jake Dulln is a traveling folk guitarist playing roots and original alternatives. Raised on the East Coast, he now finds the road his home - staying notably in Jackson, WY and southwest Colorado. An astute follower of Bob Dylan, Jake guides his mind and hands in an effort to deliver something real and unique. He has played clubs the likes of The Rabbit Hole in WV, Luna Red in CA, and the WildEdge Brewing Collective in CO. 'Been-a Long Time Since Oklahoma Station' marks his 2nd independent album release while work has begun on a 3rd project. Through trying times, Jake has continued to do what he does, fill spaces with lasting sounds.

Wyoming musician Jason Tyler Burton writes engaging songs that will make you lean in a little and really listen. He is careful with the places and people he writes about, telling complicated truths with humor and grace. WyoFile has called him “a masterful musical storyteller who manages to balance vivid specificity with relatability in his songwriting.”