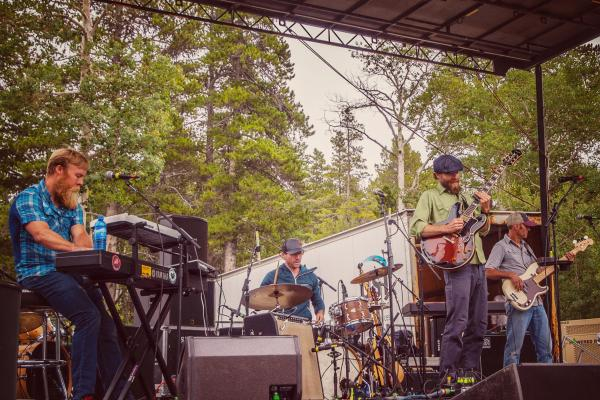 Multi-instrumentalist, songwriter and vocalist Aaron Davis is chiefly known as co-founder of longtime alt-folk/country-blues band Screen Door Porch, for his eclectic solo ramblings and the accompanying project Aaron Davis & the Mystery Machine, and as a studio engineer and session player at his own Three Hearted Recording Studio in Hoback, Wyoming. In 2021, he was awarded a Performing Arts Music Fellowship from the National Endowment of the Arts—“a merit-based honor for an artist’s work in their field.” That spurred Davis’ 10th release, Catalyst, which is on deck for August 2021 and features none other than...the Mystery Machine.

Davis has spent half of his life in Kentucky, the latter half in Wyoming, and another lifetime carving out a humble existence as an independent recording artist who pays much respect to the Bluegrass and Equality states through his lyrics. The range of his original material has been chronicled across nine albums, including his 2019 solo album, The Meander, and the four albums of “grooving electrified porch music” with Screen Door Porch. According to Vanguard Records executive and critic Bill Bentley, “Screen Door Porch transformed roots music into something much larger—a down home goodtime vibe.”

Aaron’s songs have landed in various projects including films, commercials, documentaries, podcasts, and network television. He has been fortunate to share bills with many of his heroes—Wilco, Willie Nelson, Jason Isbell & the 400 Unit, Buddy Guy, Sam Bush, Brian Wilson, James McMurtry, Steve Earle, Grace Potter, and Hayes Carll among them. This has led to theater, club and festival stages including South by Southwest, Treefort Music Fest, Magic City Blues Fest, and Sawtooth Music Festival.