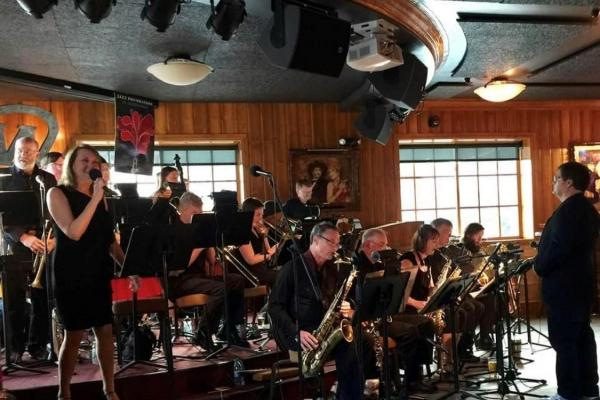 The mission of the Jazz Foundation of Jackson Hole is to provide an outlet for musicians in the Jackson Hole area to experience Big Band Jazz and to nurture and promote the appreciation of Jazz in its many forms. A uniquely American style of music, the roots of Jazz are celebrated in the rich styles that stroll through our collective history.

The Jazz Foundation of Jackson Hole began in 1992 as an off-the-cuff idea by Ron VanHorsen to start a swing band in the Jackson Hole area. He approached friends of his, Mr. Blackford and Martin Hagen--who were the local middle school's music teacher and student teacher, respectively--with the idea. Ron played 1st alto sax, Mr. Blackford was on lead trumpet, and Martin played 2nd trumpet. They searched around for other interested musicians in the area and were able to snag Lawrence Bennett for the 4th trumpet part among others. Mr. Blackford, assisted by Ron, took on the bandleader role, and Jazz Foundation of Jackson Hole was officially born!

They had their first real gig that summer, or it might have been the summer of 1993. In any case, Ron was able to call in a few favors from some friends in the music business, and they roped in a professional jazz quartet to come to town and whip this burgeoning young band into shape. Along with a little outside recruitment to fill in the gaps, they made it through their first show at Walk Festival Hall in Teton Village with the professional jazz quartet being included as a featured act. That's when things really got going.

Since these humble beginnings, the Jazz Foundation has continued to grow, change, and improve. We are now a full 18-piece Big Band with several rotating vocalists. We haven't forgotten our roots, though. Founding member Martin Hagen is still active as trumpet player and Vice President of our Board. We also occasionally get visits from Lawrence Bennett to fill in a trumpet part or blow out a few slick solos.

We've got no plans to quit, either. As long as there are people in Jackson Hole who love jazz music, the Jazz Foundation will be here to play it for them--for better or for worse.

We are an all-volunteer organization filled with jazz enthusiasts from the Jackson Hole area. We are open to the public, and anyone interested in learning about and playing jazz music is encouraged to attend our rehearsals on Wednesday nights from 7-9pm at the Center for the Arts.