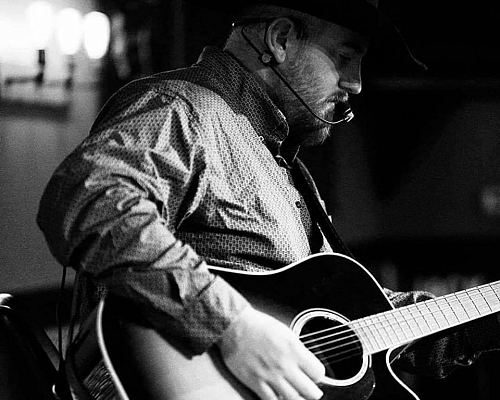 A cowboy with a talent to share, and a man who is going for his dream. Randy Burghardt is a new upcoming Rocky Mountain Country Music artist from Cheyenne, Wyoming. Originally from a small town called Fedora, South Dakota where you went to the feed and small grocery store to get sarsaparillas and chuck-wagons with your younger brother and sister every Saturday, and where Randy grew up on his family's farm. At a young age Randy took piano lessons where his love of music began. Later on he began to play guitar and at 12 years old he started writing songs. After graduating from high school, Randy attended college at SDSU majoring in Animal Science, and began his own band; the Randy Burghardt Band. In 2012 he moved to the cowboy state of Wyoming where he continued his band, which plays across the Midwest, from the Rocky Mountains to the lower part of Colorado. Randy had the privilege of playing at the CMA music fest in Nashville, Tennessee where he got to showcase his music. His song Gate Opens Wide was his first radio single in 2015; was nominated for song of the year at the Rocky Mountain Country Music Awards in 2016, and has hit the top 20 charts for several radio groups. His song Honkytonk Man has also hit top 20 charts and is a number one single. His producer is Gary Snow from Brookings, South Dakota. He has performed with several other artists and bands, such as Ned LeDoux, Kaila Dakota, Dustin Evans, Genevieve Allen, Sean Curtis, Southern Fryed, and Brand 307.