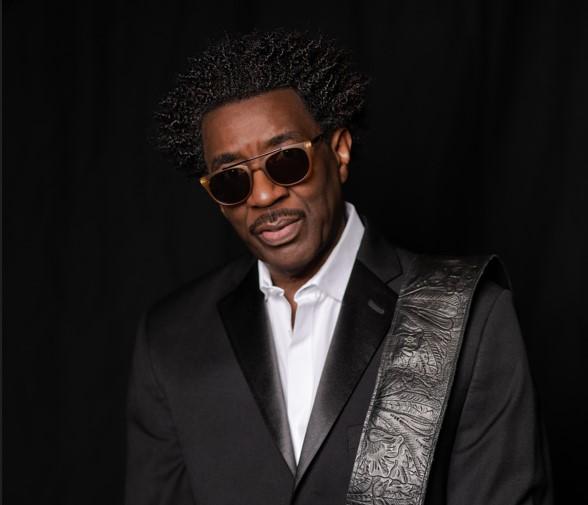 GRAMMY-nominated guitarist, Doc Powell, will make a return visit to The Silver Dollar Showroom on Thursday, Aug 25th, bringing his signature sound and popular quartet for a unique, jazz and soul-infused Showroom Session. After wowing the Showroom audience at the inaugural Jazz Session in March 2021, this encore appearance marks the first return visit by an artist to the Showroom Sessions.

Doc’s appearance comes on the heels of his new digital release, The Best of, Volume 3, (scheduled for August 4 on his own label DPR Music Group). The album features a star-studded list of guest artists, including Philip Bailey, Howard Hewett, Boney James, Patrice Rushen, Gary Taylor, and Kirk Walum. He will debut performances of several songs at this Showroom Session.

In the 1980’s, as a young New York guitarist, Powell was enlisted by fast-rising star Luther Vandross to join his band. During his fifteen-year stint with Vandross, he played on world-wide performances, including an unprecedented ten sold-out shows at London’s Wembley Stadium. After garnering such wide-reaching exposure, Powell created compositions for multiple movie soundtracks including Down and Out in Beverly Hills, Turner and Hooch, The Goonies and The Five Heartbeats.

Previously released singles from Powell’s solo contemporary albums have generated multiple Top 20 and #1 chart hits on Billboard’s Contemporary Jazz Chart. He continues to be one of the most sought-after musicians in several genres, and has played alongside luminaries as varied as Prince, Aretha Franklin, Mariah Carey, Quincy Jones, Smokey Robinson, Stevie Wonder, Alicia Keys, Jennifer Hudson, John Legend, and many others. Having recorded on more than 200 projects, Powell has earned twelve gold and platinum records, and earned a GRAMMY nomination for his breathtaking cover of Marvin Gaye’s classic “What’s Going On.”

Talent Buyer, Justin Smith, said, “The opportunity to experience this seasoned and world-renowned guitar virtuoso, in the listening-room setting that The Showroom provides, will be truly elevating. We feel so fortunate to be able to, once again, present this force in jazz music to Jackson Hole.”

Priced at $150 per. Tickets are limited and include wine reception, dinner, and the show. Doors will open at 6:00 p.m.